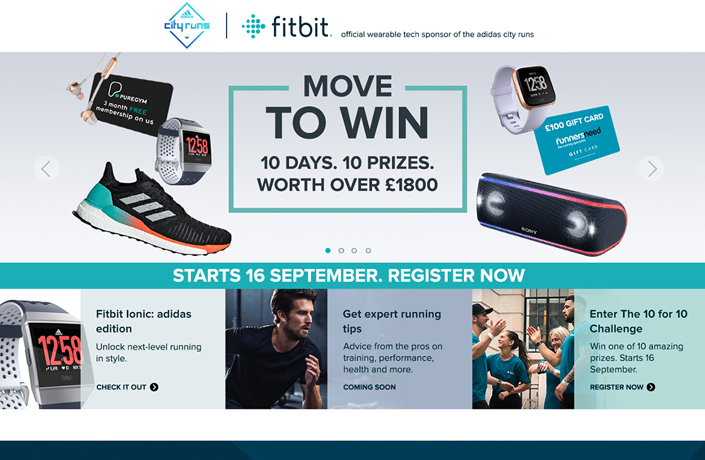 Fitbit have been motivating their users to reach their health and fitness goals for over a decade now with their range of cutting-edge products.

But not only are they a high-tech producer of Fitbit devices, they are also involved in many sporting events and charity fundraising. Their most recent partnership has seen them join forces with the Adidas City Runs, a challenge series of closed-road running events throughout the heart of London, with the next event kicking off on 17th June.

Fitbit will be incentivising participants to run further for a good cause, by taking on the Fitbit & adidas City Runs Million Kilometre challenge. With a goal of participants reaching a million kilometres in two weeks, starting from the 4th June.

The Million Kilometre Challenge is on!
Runners can take part either in the organised run or virtually, regardless of whether they have a Fitbit by using their smart phone and the Fitbit App.

The core proposition is: FEEL GOOD. DO GOOD. Participants have a chance to win great prizes in a weekly draw. And for each entrant, Fitbit will make a £1 donation to Great Ormond Street Hospital (up to £10k). Prizes include Fitbit Ionic: adidas edition and adidas Solar Boost running shoes.

Inca Creative’s role was to deliver the dedicated microsite and email marketing for the challenge, to drive sign up and raise awareness of the adidas City Runs programme.

On the site participants can view the collective distance that has been run towards the 1m kilometres, check out prize details, purchase a Limited-Edition Fitbit Ionic: adidas edition device as well as many other features.

Participants can sign up for a weekly email update with the distance run collectively, to encourage a sense of community, motivating them to walk/run further and to remind them of the weekly prizes.

This is a fantastic example of engagement marketing, connecting with both existing Fitbit fans and potential future purchasers, whilst promoting adidas products and events and contributing to a worthy charity.

Do you have a successful customer engagement programme?

Talk to us about how we can help you with your marketing ideas.