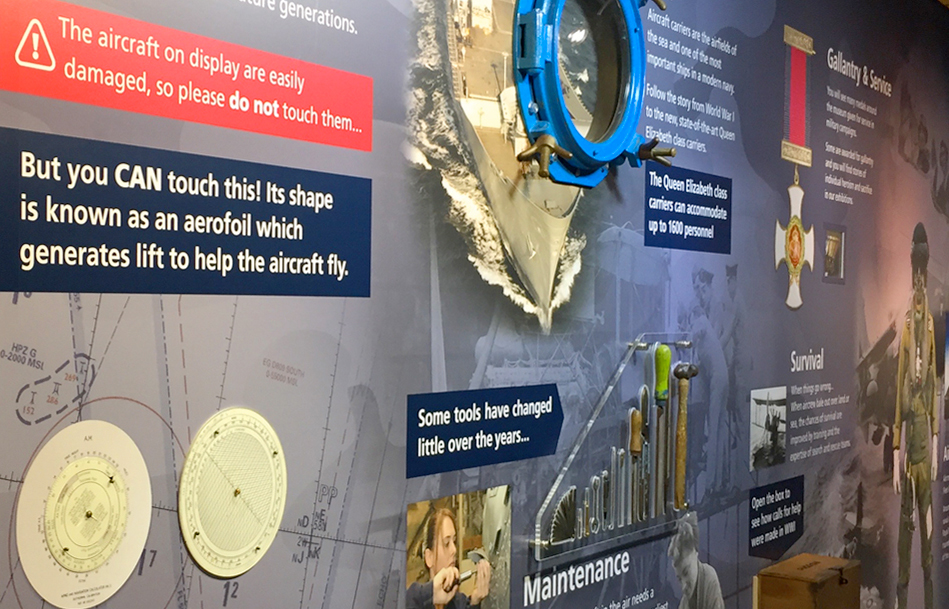 Telling the story of naval aviation from Sea Vampires to Concorde

At Inca we’re huge museum fans and are lucky enough to be involved in many museum interpretations in the UK and further afield.

One of our UK museum clients is the Fleet Air Arm Museum in Somerset, which has been around since the 1960s and has grown into Europe’s largest naval aviation collection.

The Fleet Air Arm is the flying arm of the Royal Navy. Originally formed in 1933 it’s renowned for its heroic actions during the Second World War.

Today the squadron are flying aircrafts including Merlins, Hawk Jets and Wildcats from ships across the globe. And helping across a wide range of roles from disaster relief to landing Royal Marines onto hostile shores.

The museum tells the story of naval aviation and houses many exhibits and aircraft, from the first manned kites towed behind naval vessels, to helium airships, seaplanes, bi-planes and modern Sea Harriers. Even the Concorde 002 prototype lives there.

Showcasing history in a 21st century way
Working closely as part of a team of museum interpretation specialists our task was to to widen the appeal of the museum, and engage young children, adults and families as well as older people.

The Museum’s Welcome Gallery originally showcased some technical models, which were interesting to a certain genre of visitor but didn’t introduce or ‘set the scene’ for the contents of the Museum.

We wanted the introductory experience and visitor journey to be immersive and engaging from the first moment, so visitors could get the most out of their visit.

And this needed to be delivered in a 21st century way using technology for a multi-layered experience, with multi-sensory appeal.

Creating a new welcome
The newly designed Welcome Gallery, as well as setting the scene for the content, needed to orientate and excite people about what they could expect to find.

A cohesive space that would draw visitors from the entrance into an engaging, introductory experience with a wow factor.

Introducing interactive elements
As part of the new design we installed an Innovative 3D Feature Wall with representative artefacts from key exhibits throughout the museum embedded in the wall as touchable 3D objects.

Artefacts included the wing of a plane, a box with a carrier pigeon, a fighter pilot’s helmet and medals amongst other interesting items to tease visitors of what was to come.

Using animation and bold graphics to tell a story
Visitors were able to learn about 4 different key aircraft via an animated HUD (heads up display), using state of the art technology displayed on a transparent Perspex screen. And bold large-scale graphics were included as part of the installation to bring to life the experience.

Graphic wallpaper was developed which formed a sympathetic backdrop to the galleries different components, alongside graphic panels displaying information and photographs.

Video and use of original images and footage provided an overview of some of the fascinating stories to be discovered within the Museum and ongoing interest for visitors on their journey.

A new interactive visitor journey for the young and older
Engaging families was key so children were entertained with adventure trails to follow throughout the museum with our fact-finding exercises.

And we made sure that the visitor journey through the museum was integrated and clear with general wayfinding and signage. This included development of a multi-touch Gesture Wall to help visitors navigate their way through the museum featuring a large projected map identifying the different areas of the museum and facilities. With interactive touch points revealing further information.

And we’re pleased to report the educational trails were a hit with the children, upgrading the overall experience to a true family day out.

But don’t take our word for it… go and see for yourselves and enjoy afun and informative day out! www.fleetairarm.com.

To discuss your museum or heritage plans call…